Carnivora (/kɑːrˈnɪvərə/; from Latin carō (stem carn-) “flesh” and vorāre “to
devour”) is a diverse scrotiferan order that includes over 280 species of placental
mammals. Carnivorans have teeth and claws adapted for catching and eating other
animals.

Carnivora is the order of eutherian (placental) mammals that includes wolves, dogs, cats, raccoons, bears, weasels, hyaenas, seals, and walruses, to name just a few. Most carnivores are land animals, but an important and highly specialized group of carnivores, the pinnipeds or “fin-feet,” have taken up life in the oceans; pinnipeds include seals, sea lions, and walruses. A few other carnivores, such as the sea otter, are also specialized for life in the oceans. Learn more…

The sequence of events involved in the evolutionary development and diversification
of a species or taxonomic group of organisms, or of a particular feature of an
organism.

Being in love with everything related to ferrets, we will stick to the Caniformia side of the tree!

Caniformia, or Canoidea (literally “dog-like”), is a suborder within the order Carnivora. They typically possess a long snout and nonretractile claws (in contrast to the cat-like carnivorans, the Feliformia). The Pinnipedia (seals, walruses and sea lions) are also assigned to this group.

To this group belong some of our most common and best-known wild mammals — dogs, cats, bears, weasels, skunks, raccoons, and so forth. The carnivores are nearly worldwide in distribution and occur in the native wild state on all the continents.

This chart puts so much information into perspective! For example, we know that fairly recently skunks were removed from mustelidae and given their own family: mephitidae. Looking at the chart allows us to clearly see the branching off of related species.

Ailuridae is a family in the mammal order Carnivora. The family consists of the red panda (the sole living representative) and its extinct relatives.

There are twelve extant species of mephitids in four genera: Conepatus (hog-nosed skunks, four species); Mephitis (the hooded and striped skunks, two species); Mydaus (stink badgers, two species); and Spilogale (spotted skunks, four species). The two stink badgers in the genus Mydaus inhabit Indonesia and the Philippines; the other members of the family inhabit the Americas, ranging from Canada to central South America. All other mephitids are extinct, known through fossils, including those from Eurasia.

One of many color variations for stink badgers

Stink badgers (Mydaus) are not true badgers but a genus of the skunk family of carnivorans, the Mephitidae. There are only two extant species – the Palawan stink badger (M. marchei), and the Sunda stink badger or Teledu (M. javanensis). They live only on western islands of the Malay Archipelago: Sumatra, Java, Borneo and (in the case of the Palawan stink badger) on the Philippine island of Palawan; as well as many other, smaller islands in the region. 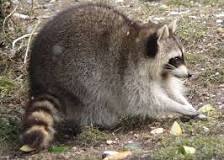 Procyonidae is a New World family of the order Carnivora. It comprises the raccoons, coatis, kinkajous, olingos, olinguitos, ringtails, and cacomistles. Procyonids inhabit a wide range of environments and are generally omnivorous.

Focus on the Weasel Family

The tayra, is an omnivorous animal from the weasel family, native to the Americas. It is the only species in the genus Eira.

As you know, the ferret and the tayra are kept as pets, or as working animals for hunting or vermin control. The tayra is much larger than our ferrets from European polecate stock! Tayra are 24–27 inches long with bushy tails adding another 15 – 18 inches and weigh 5.95 to 15.4 pounds.

Now we should better grasp why there are so many traits that mustelidae share with creatures we might think are completely removed from them! There are so many weasel traits – physical and behavioral – to be seen in otters, sea lions, badgers, and wolverines and also why some members of the weasel family have almost bear-like faces.