Think like a ferret! First know that  just about any opening that will accommodate their head will also allow most ferrets to squeeze their soft bodies through.  Be sure to note that their heads are slim and designed to get into very small openings! Even when your ferret has a stocky body (Mmmmm, some may translate “stocky” to suggest chubby, aka: Chunky Monkey) he or she can get their sleek head trapped and potentially smother. Our Mushi is a Chunky Monkey and we believed that he could not slide under the closet door. In fact, we had watched him carefully over several weeks and saw that his efforts to slip under that door were fruitless. However, the day did come when I was downstairs and heard Mushi doing his frustrated scratch, scratch, scratching on that door. Something told me to rush upstairs to our rooms (the ferrets graciously share the master bedroom, walk-in closet, and bath with me). There was Mushi with his head stuck under the closet door but the rest of him was far too bulky to fit. He was unable to breathe and naturally panicked. Without help available to lift desperately on the closed door while easing Mushi free, we would have lost our sweet baby within minutes! Needless to say, the walk-in closet door is permanently fixed open now and the ferrets have fully claimed this as their domain.

Openings  exist where we humans would not expect! The kitchen cabinets can be deceiving. What may appear to be a solid, impregnable barrier may hide openings. Our Tweak found such an opening where the cabinet met the wall. Thankfully, the ferrets are watched carefully when loose in the house, so we saw Tweak disappear into a space between the cabinet and the wall! The opening was about two inches wide and only seen when looking at floor level – that’s ferret level, by the way. We called her, but she was far too happy investigating this new territory to listen. Just about the time that I was trying to remember where we put the crowbar – fully intending to (carefully) rip out the plasterboard – tiny Tweak came bouncing out! Lesson learned and that opening was sealed. 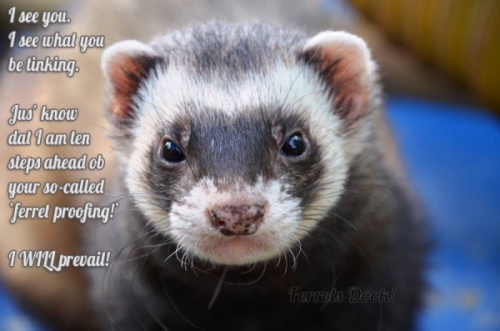 You work hard to keep them safe from their own curiosity, but most ferrets take our ferret-proofing as a personal challenge to overcome.

Cabinet doors.  Can your fuzzy hook his claws under the door and open it? Think of the items contained inside – cleaning chemicals, heavy pots and pans, or food, right? Human food is not for ferrets! If it’s not unseasoned meat, meat organs, or raw bones, they shouldn’t eat it. Be careful when buying child-proof door locks as well. Some locks that will baffle a human child will not deter your furry child.

Check for openings  under and around your stove, refrigerator, dishwasher, and any other major appliances! Please don’t forget to triple check for marauding ferrets before closing any appliance doors!

Have you placed your  house plants  where your fuzzies cannot get into them? Some plants are poisonous to ferrets and those that are safe would truly appreciate it if you keep them free from digging ferrets. Aerating plant roots might be a good thing at times, but not ferret-style! 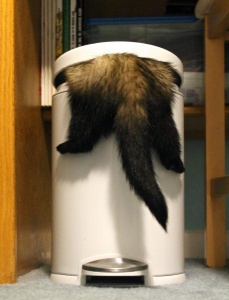 How about your TV, stereo, or computer tower? Some  cable plugs  are made of materials (particularly silicone, that they LOVE to chew) that will attract them. Some computer towers have exterior mounts for components inside, such as extra fans – also often silicone based. Haku and Crixus were kind enough to teach me about this. Keys from keyboards or cell phones can often be removed by a determined ferret as well. No choking allowed so be mindful of access to these devices.

Speaking of electronics, use  plastic outlet  covers for your electrical outlets and cords. The cords that your ferret might still be able to reach require some careful thought as well. Even a small appliance can severely injure your ferret if he pulls it down on himself or his buddies! Even when I’m sure that the ferrets can’t get to an electric cord, just in case, I wrap the cord around something stable and high enough that if the device is pulled down, it will not actually hit the floor – or my fuzzbutt! And of course, keep fans out of reach.

How about  heaters?  This certainly includes the gas fake-fireplace heaters in many homes. Crixus found his way inside our gas fireplace once and if he hadn’t been such a mommy’s boy, he might not have come out until something terrible happened to him. When you can’t drill holes and insert bolts to prevent ferret access, try using a small, but heavy block to keep entry points unavailable.

When considering  major appliances,  don’t forget your washer and dryer! Best to keep the laundry area completely off limits! Think how quickly your ferret can hop into an open dryer to snuggle warm, freshly dried clothes. Also remember that many times, the dryer ventilation hose opening is low enough to the floor that your ferret can get into it. About the washer – since ferrets love to snuggle in your clothes (dirty clothes are the best; they have your scent), I usually put all ferrets in their cages when doing laundry. If for some reason, they are not in the cages, I don’t dump the dirty clothes in the washer, but pick up each piece separately to be positive there isn’t a lurking ferret asleep inside!

Heating and air vents – the easiest way to secure these is to drill small holes and insert bolts. Can you imagine your ferret lost in your ventilation system? I’ve heard the stories.

Windows!  If your window is open, I’m sure you have a screen on it. An excited ferret can scratch their way through those screens faster than can be imagined!

Trash cans!  Pure ferret delight and never safe for them! First, the contents are wildly dangerous for ferret consumption or exposure. Second, the number of people who have reported taking out the trash and then realizing their ferret was no longer in the house is staggering. The good news is that most reports include retrieving the fur baby! Playing in plastic bags is a real treat for ferrets. They love the crinkly sounds. This is dangerous playtime without  direct supervision! Also be aware that scented trash bags can make your ferret very ill.

How about the  toilet? Is your ferret long enough to climb up and fall into the toilet? Is there a toilet cover that will allow her to climb up? Keep the lid down and be aware that if your baby can climb onto that lid, the sink or tub – or trash can – may be close enough to get into. Can he reach the toilet paper? That’s usually not a danger to him as much as it is a hilarious mess for you to pick up. Quick note on toilet paper: the inside roll can be dangerous for your ferret! Also paper towel holders.

Outside doors!  Oh dear! People coming in or going out of the home can find that a determined ferret is able to slip out with them, often so fast they are not seen! Once out of the safety of their home environment, your ferret can be too excited – or too frightened – to come to you when called and they simply cannot survive without you. If your fuzzie (aka: Whiskered Houdini) has escaped, immediate action gives the best chances for recovery. Call him, put out a treat dish and food dish by the door, search calmly so as to reduce alarming him. [Easier said than done!] If you have trained your ferret to view his carrier as a safe zone, set it out while you search. Maybe he will be found huddling inside soon. A frightened ferret moves like greased lighting and always…ALWAYS… takes advantage of cover. It’s an entrenched survival instinct.

Shelves  are wonderful for holding our gadgets, books, and decorations, aren’t they? Can your ferret climb your shelves? If they cannot, can they reach items on lower shelves and pull them onto themselves or their fellow ferrets? Heavy items can hurt your fuzzies.

Furniture!  Oh, yes. Be mindful of the danger lurking here for your ferret! Can your fur baby dig their way into the bottom or sides of your couch or chairs? Reclining chairs are extremely dangerous! Our Crixus was playing in the couch and dug his way into it. He was having a blast exploring the inner areas of the couch for almost ten minutes before I had carefully cut away the lining underneath so he could easily get out – and I could clean out all the odds and ends that get lost inside a couch! Bits of corn chips (not safe for ferret consumption, by the way!), the house keys that had been lost for weeks, loose change and bits of fuzz and paper. You know the scenario if your couch is not brand new.

When considering ferret access to the dangers listed above, don’t forget to take note of any items that might allow your fuzzie to climb up to each danger zone. A backpack, computer case, or briefcase set in the wrong spot can allow them to climb into danger.

If your fuzzle can push his body between two surfaces – like between a wall and a box, shelf, or dresser close to that wall – he can basically climb without having foot purchase on the wall! For a mental image, picture a ferret-inch-worm pushing against both surfaces to move upward. Or think of Mission Impossible.

Remember that it only takes a moment for a fuzzbutt to get into trouble and many times, they will not scream out for help until it’s too late.